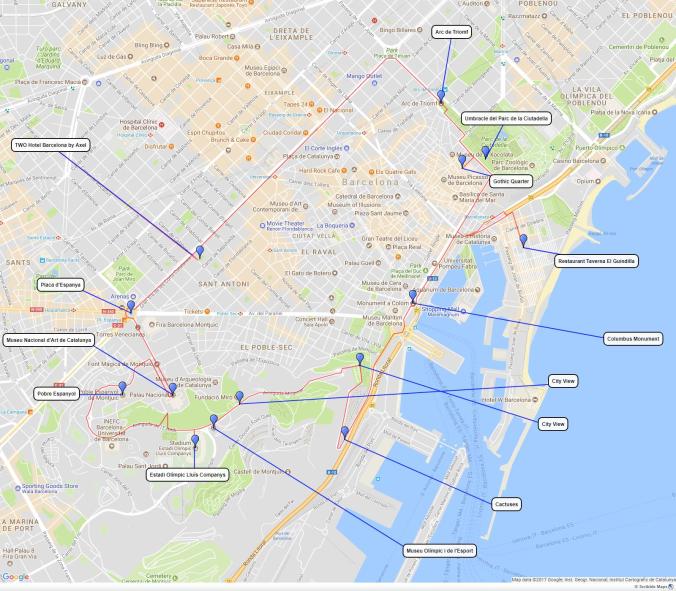 I started out at TWO Hotel Barcelona by Axel, where I was staying, and walked the route marked in red. I ended up walking a big loop to the waterfront, and then returning to my hotel via the Gothic Quarter and the Arc de Triomf.

Barcelona is a city that offers a bit of everything: history, architecture, food and drink, sports, green space, museums, art galleries, and an amazing waterfront. What better way to explore this incredible city than by foot?

During my stop in Barcelona, I decided to spend a day that I had free to do one of my favorite things when visiting a new city: aimless wandering (hence the title of this article), because . Don’t get me wrong, it is vital to book activities in advance for any trip, especially since tickets to events and activities need to be booked well in advance sometimes (I learned my lesson about that the hard way when I went to Chicago and wanted to go on a tour of Wrigley Field). However, wandering around a new city with no specific activities planned is unbelievably freeing. Afterall, isn’t that what travel is all about? We spend so much of our lives living based on a regimented schedule. Removing ourselves from that kind of way of life while travelling is one of the things that makes travelling so special. A great way of doing that is visiting an interesting city and doing a self-guided walking tour!

For the sake of full disclosure, while my walking tour was aimless wandering, I decided to make Montjuïc my starting point, at the outset of the walk. When I heard that this hill in the southwest part of the city had great opportunities to view the entire city, particularly the waterfront, and is where the 1992 Summer Olympics were hosted, I knew I had to go.

Upon leaving my hotel, it was a fairly short walk to the Palau Nacional,  at the foot of Montjuïc, which houses the Museo Nacional d’Art de Catalunya. The architecture of the Palau Nacional was essentially the reason why I came to Spain. It left me awe struck, and wanting to see more of Montjuïc.

Palau Nacional has a commanding, yet stunning presence, at the edge of Montjuic

A must-see is Poble Espanyol, which is a short walk from Palau Nacional, heading up the slope of Montjuïc. Poble Espanyol is particularly noted for its architecture, where a town a Spanish village was recreated, with a variety of different types of architecture from around Spain. 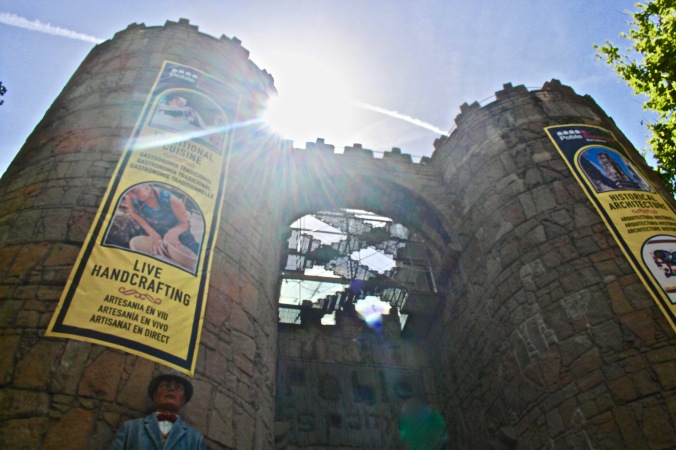 As I walked, and climbed, I was amazed by the stunning views of the city. My favourite viewing spot was in front of Hotel Miramar, which offered a spectacular view of the Barcelona waterfront.

View of Barcelona from in front of Hotel Miramar

My favourite part of Montjuïc was without a doubt Estadi Olimpic Lluis Companys. The architecture is impressive, and the location is quiet, peaceful, green, with those immaculate views of the city within a stone’s throw. It’s no surprise that the stadium was picked to host the 1992 Summer Olympics! 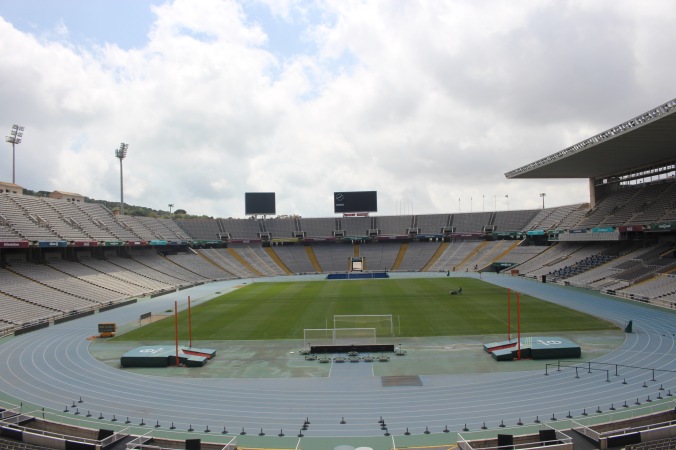 View from inside the entrance of Estadi Olimpic Lluis Companys

During my many experiences wandering around cities, I have developed a bit of a habit of stumbling upon “cool things”, and having absolutely no clue what it is, or the meaning that it holds, and later find out are gems. What I mean by that is gems in the sense that it is an iconic attraction that is known worldwide (I had that experience with the Spanish steps when I visited Rome), or at the very least, one of the most popular places to visit in that particular city. This was one of those occasions. 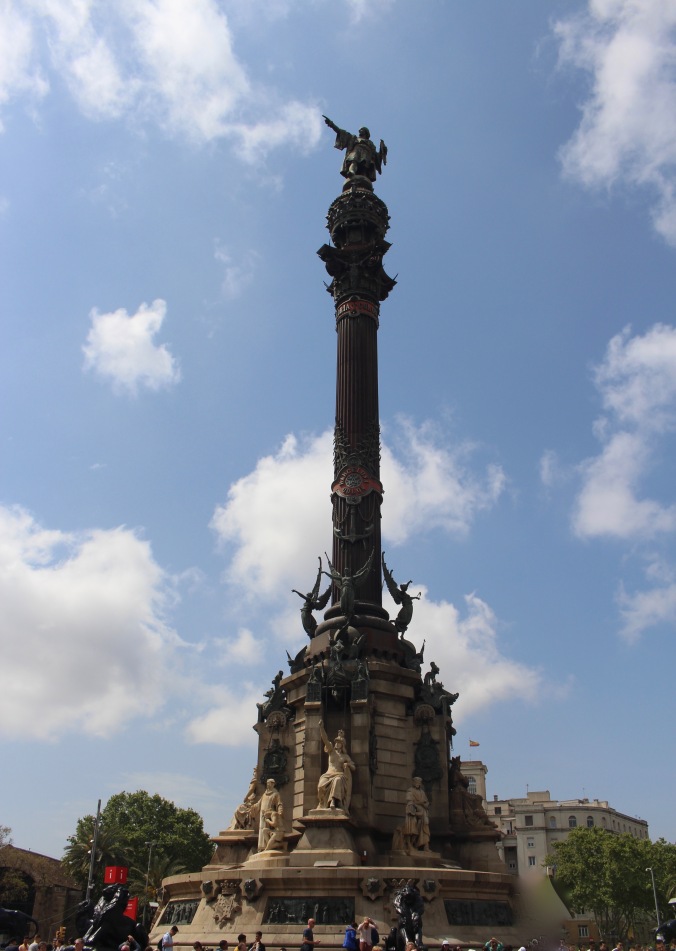 After descending Montjuïc, and passing the Columbus monument (which is a beautiful statue from purely an architectural standpoint, despite the controversy associated with Columbus), I came to La Barceloneta. This beautiful neighbourhood, which lays on a spit of land that juts into the sea, adjacent the Gothic Quarter, captivated me. I stopped and looked down the cozy, narrow confines of Carrer de Pizarro and I was compelled to venture in.

I was so glad that I did, because I was greeted with fascinating architecture, as well as lots of bars, restaurants and a beach. For me, the main appeal of this neighbourhood was the calm vibe, and escape from the hustle and bustle of the rest of the city.

After leaving La Barceloneta, I meandered my way through the Gothic Quarter. The Gothic Quarter is the main draw of Barcelona (in my opinion), with architecture dating back to the Middle Ages. In fact, if you are looking for architecture, museums, history, culture, great dining, churches and that old town appeal, well the Gothic Quarter (or ‘Barrio Gotico’ as the locals call it) has all of that covered in spades. In fact, I think it covers off the checklist of most of the reasons why many people visit Spain. 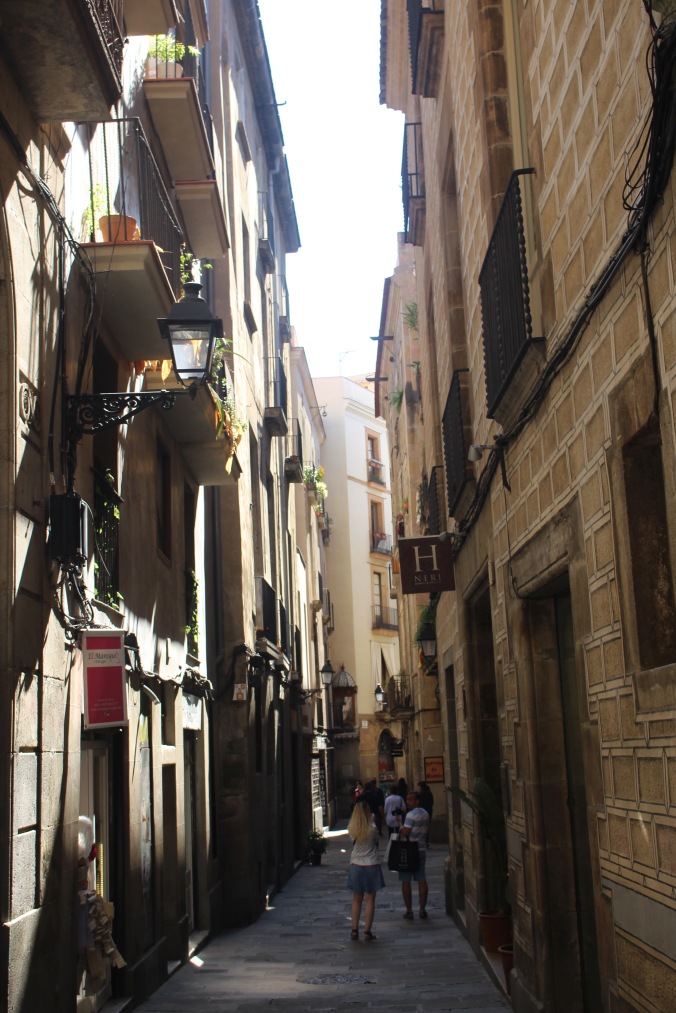 One of the main appeals of this neighbourhood is the streets. They range from narrow, labyrinthian streets which really show glimpses of the city’s medieval past, to the wide-open, tree lined Las Ramblas.

The thing that I enjoyed the most about visiting the Gothic Quarter was the churches. I have always been a real sucker for grand old churches (and when I say old, I mean old). The architecture of Santa Maria del Mar and Santa Maria del Pi is gorgeous; the history is fascinating and I ended up spending hours exploring them. Both churches back to the 14th century (a huge deal for someone who is from a country where a building that is considered ‘old’ may date back to the 19th century). My experience visiting them was special, and it really exemplified why I loved Spain so much. 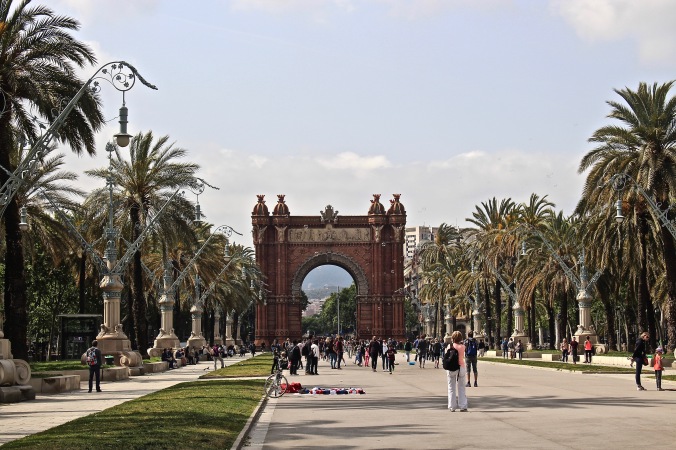 After getting my fill of the Gothic Quarter, I began to walk toward Gran Via de les Corts Catalanes with the idea of heading back to my hotel. Along the way, I saw the Arc de Triomf in the distance. As I walked closer, I realized what a gorgeous piece of architecture it truly was!

While there is a huge value associated with planning everything that you do in detail, while travelling, my experience stumbling upon Arc de Triomf and La Barceloneta was hugely rewarding. What appeals to me about it is that when I travel, I seek adventure and discovery, and striking out on my own, without a specific goal in mind or knowing exactly what’s out there, while soaking in my surroundings, is the way to go.